Treatment times for children with minimal tuberculosis (TB) can be safely reduced from six months to four months, according to the results of the SHINE trial, published yesterday in the New England Journal of Medicine. These results have already led to changes in international guidelines.

More than a million children develop TB each year, and more than 205,000 children die from the disease. However, children with TB generally do well if they are diagnosed and treated. 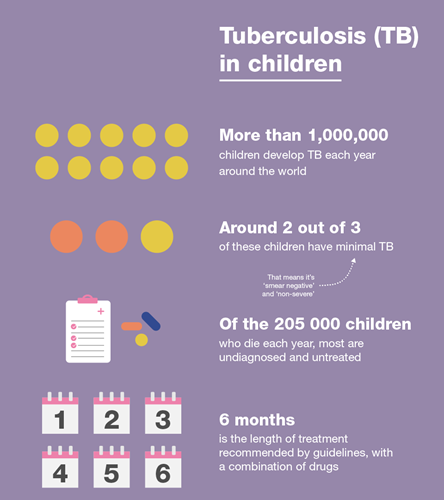 TB treatments involve taking a combination of drugs for several months. At the time SHINE was developed, guidelines recommended that children with drug-sensitive TB are treated for six months. However, taking several pills every day for six months can be difficult for children and carers. Some TB drugs interact with other drugs, such as those used for treating HIV, making treatment even more complicated. Reducing the length of time children need to take pills for could make treatment easier for children and carers, as well as reducing costs to patients and the health system. 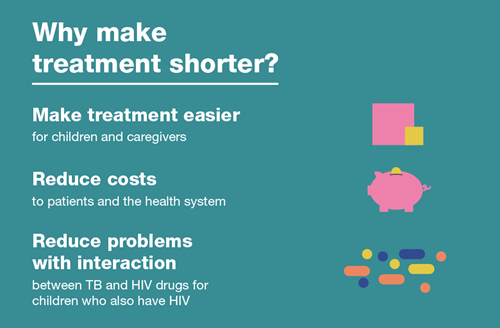 The SHINE trial took place in South Africa, Uganda, Zambia and India. 1204 children with minimal TB took part in the trial. Minimal TB is TB that is smear negative (so cannot be detected in sputum using a microscope) and non-severe. They were randomised to receive either:

Children in the trial were followed up for 72 weeks.

The SHINE results show that children with minimal TB do very well on treatment. 93% of children in both groups were successfully treated and confirmed alive and well at the end of the trial. Less than 3% of children in the trial had unfavourable outcomes.

SHINE found that the four month treatment was as good as the standard six month treatment for children with minimal TB. There was no difference between the six months and four months groups in terms of proportion with an unfavourable outcome, or deaths. Side-effects related to treatment were few, and similar across both groups. 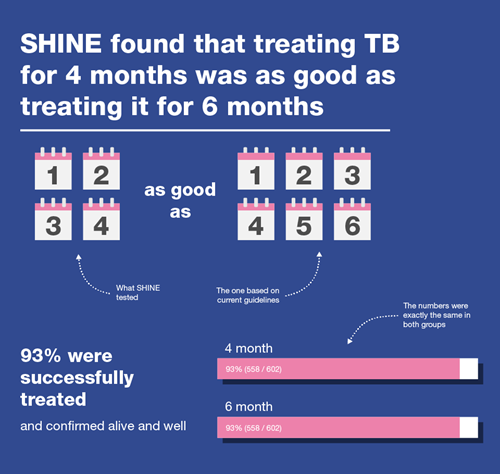