A new study presented yesterday at the American Society of Clinical Oncology (ASCO) Meeting in Chicago recommends changes to practice after finding that docetaxel chemotherapy is substantially more effective for some patients with advanced prostate cancer than others.

The meta-analysis of patient data from 2261 men in 3 trials showed that on average, chemotherapy improved 5-year survival by 11% compared to standard hormone therapy.

Docetaxel chemotherapy was more effective in patients with large number of metastasis when they were diagnosed. After five years, 38% of patients who received chemotherapy were alive compared with 26% who had hormone therapy alone. There were even greater benefits for patients who also had larger tumours, with 55% surviving for 5 years, compared to just 20% of patients on hormone therapy alone – a 35% increase overall. 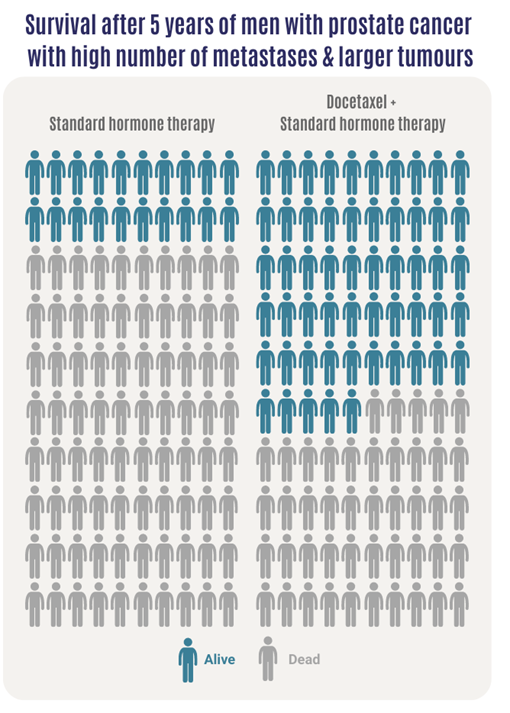 Meanwhile, patients with fewer metastases whose tumours had been diagnosed at an earlier stage did not benefit from docetaxel chemotherapy at all.

These findings could allow chemotherapy to be targeted at those who benefit most, while others can be offered other effective treatments, such as abiraterone, enzalutamide or darolutamide, which will extend their lives further and allow them to avoid unnecessary side effects.

Dr Claire Vale, who presented the data at ASCO, said: “Research into new prostate cancer treatments can be incredibly expensive and can take a long time, so this type of analysis that makes the best use of the information we already have, can make a big difference.”

The next step for the team will be to evaluate how docetaxel chemotherapy interacts with other treatments to understand who will benefit most from different combinations of these drugs.

This multi-national research project was led by the MRCCTU at UCL on behalf of the STOPCAP Collaboration, funded by the UKRI Medical Research Council and Prostate Cancer UK and supported by Movember.