Adding the chemotherapy drug docetaxel to standard treatment helps patients with prostate cancer to live for longer without their disease coming back or getting worse but does not improve survival overall. These results from the STAMPEDE trial were published, open access, in the Journal of the National Cancer Institute (JNCI) Cancer Spectrum last week.

These findings from the “docetaxel comparison” are a long-term follow-up study from STAMPEDE focused on patients with non-metastatic disease. In these patients, their prostate cancer had not already spread to other parts of the body before they joined the study.

Therefore, follow-up continued in the long-term and findings were presented separately for metastatic and non-metastatic patients.

In 2019, we published the long-term results for those patients with metastatic disease when they joined the trial. That paper confirmed docetaxel improved survival in that setting.

This new paper in 2022 addresses whether patients with non-metastatic disease could benefit from adding docetaxel to standard treatment.

In both groups, the standard treatment was hormone therapy with or without radiotherapy to the prostate. The doctor and patient decided before joining the trial whether radiotherapy would be part of the treatment for the patient. The study took place in the UK and Switzerland. Consenting participants were followed-up for at least 5 years after being assigned to one of the two groups.

These new findings are consistent with the previous results presented in 2015. Adding docetaxel to the standard treatment did not improve the survival of patients with non-metastatic prostate cancer.

A similar proportion of patients on each group reported unwanted side-effects in the long-term. 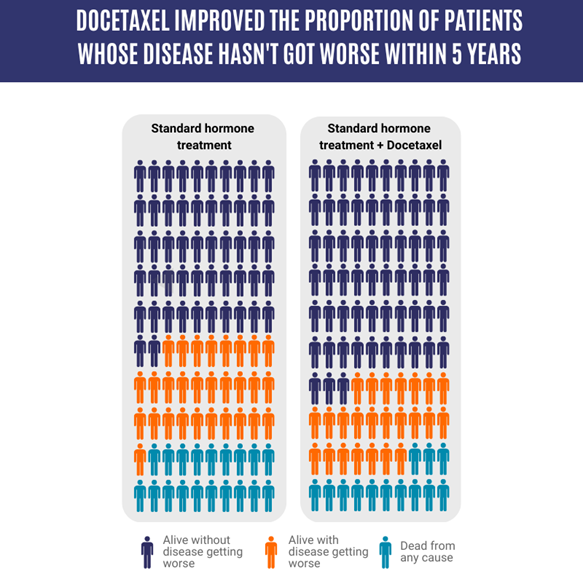 Previous results from STAMPEDE in 2014 confirmed findings from the MRC PR07 trials and SPCG7 trial that adding radiotherapy to the standard treatment helped patients with prostate cancer to live longer. The new findings show that if these non-metastatic patients are going to receive prostate radiotherapy, there is no need to include docetaxel.