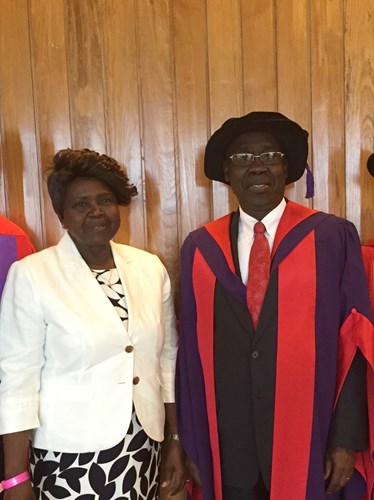 It is with great sadness that we learnt of the death of our wonderful friend and research collaborator for many years, Professor James Hakim, who died on 26 January 2021 from COVID-19 complications. He will be greatly missed by his colleagues at the MRC CTU at UCL and around the world.

Over the past two decades, James has been at the forefront of clinical research in Africa. He started as a cardiologist and then as HIV and TB engulfed southern Africa, he shifted his focus to HIV and TB prevention and treatment. In 2001 he established the University of Zimbabwe Clinical Research Centre, which has collaborated with the MRC CTU at UCL on many trials.

James was a leading figure in the DART trial, which was instrumental in the introduction of antiretroviral therapy in Africa and REALITY trial evaluating treatment of advanced HIV disease. James played a major role in developing paediatric trialists in Zimbabwe who have collaborated with MRC CTU at UCL and Penta on trials addressing important questions on treatment for children with HIV (ODYSSEY, CHAPAS-4), TB (SURE) and bacterial infections (PEDICAP).

In 2016 James was awarded an honorary degree from UCL in recognition of his enormous contribution to research. . As a leading African scientist Professor Hakim was always in huge demand as a plenary speaker at major international conferences, and co-chaired the Scientific Programme Committee for the 2018 International AIDS Conference. Many have commented on his amazing input into training and mentorship of young Zimbabweans.

Many heartfelt messages have been sent to us from research teams around the world who knew James. We will all miss his leadership, wisdom and friendship. Our condolences go out to his wife and family. You can hear a tribute to James broadcast on BBC Focus on Africa on 27 Jan.