The results of the CHAPAS-3 trial have recently been published in the Lancet Journal of Infectious Diseases. The trial, which took place in Uganda and Zambia, investigated the safety and effectiveness of three different drugs when used as part of a combination to treat HIV-infected children.

The current World Health Organisation guidelines for treatment of both adults and children recommend a combination of two NRTI drugs, together with a drug from another class. In CHAPAS-3, children were randomly allocated to one of three groups, to receive either:

No trials had previously compared the effects of NRTIs in first-line antiretroviral therapy (ART) in children in Africa.

The trial found no major differences between the NRTIs in terms of side effects, and how well children did. However, taking abacavir as the first course of treatment was shown to increase how well children later responded to a second course of treatment. Abacavir also has the advantage that it can be taken once daily, rather than twice, as part of a fixed dose combination tablet. This makes taking treatment easier for children and their carers.

Overall, this trial endorsed the WHO’s 2013 recommendation that abacavir is the preferred first NRTI for children; something which is expected to be reiterated in the World Health Organisation's forthcoming  2015 HIV treatment guidelines. 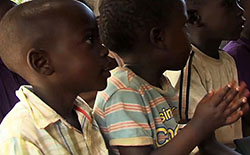