Andrew Nunn becomes an honorary member of the IUATLD

We are delighted to announce that Andrew Nunn was made an honorary member of the International Union Against TB and Lung Disease (IUATLD) at the Union’s World Conference on Lung Health in Barcelona on 1 November 2014.  Andrew has been honoured for his pioneering work on tuberculosis.

The IUATLD is an international scientific Institute, which works across TB, lung disease and HIV/AIDS in over 150 countries each year; it is the world’s leading professional body for researchers working in these disease areas.  The IUATLD grants the title of Honorary Member to recognise the achievements of individuals who have devoted their careers to finding medical solutions to TB and lung disease.  Honorary Membership is a lifetime status and members serve as informal advisors to the IUATLD leadership.

Andrew Nunn has worked for the MRC since 1966.  He has played a key role in studies that have transformed our understanding of tuberculosis and HIV today.  Andrew was directly involved in the design, conduct and analysis of a series of trials undertaken by the MRC in the 1970s and 80s that led to the worldwide adoption of short course chemotherapy for tuberculosis.  This highly effective regimen remains the mainstay of tuberculosis treatment today.

Andrew later joined the MRC’s Uganda AIDS Programme which researched the dynamics of the HIV epidemic in rural Africa.  He has also contributed significantly to the development of research networks and clinical trials expertise in dermatology within the UK.

Andrew is now Associate Director of MRC CTU at UCL, and Chair of the Infections Research Theme.  He is currently an investigator and senior statistician on three international Phase III trials of tuberculosis, including STREAM, the first Phase III trial in multidrug-resistant TB. 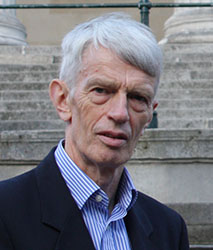